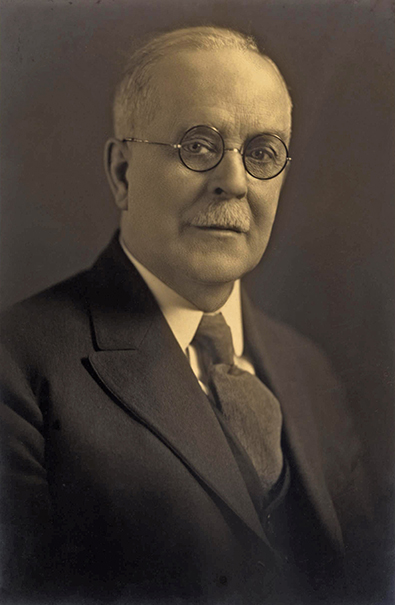 Before he was ever a Nazarene, F. M. Messenger’s colorful history included Christian communism and exceedingly strong anti-Methodist and anti-Nazarene prejudices. Ironically, he moved from the radical holiness movement’s wild-and-wooly fringe to emerge as one of his generation’s most valued Nazarenes.

Frank Mortimer Messenger was born in Stoddard, New Hampsire, in 1852. He entered the textile business, rising to become manager of the impressive North Grosvenordale cotton mill. Messenger was a nominal Christian until his evangelical conversion in 1893. Soon, he also testified to receiving the grace of entire sanctification while attending the Douglas Camp Meeting in Massachusetts.

Messenger began using his spare time to preach wherever he found an opportunity. By 1898, he was an earnest “come-outer,” advocating separation from mainline Methodism. He gravitated toward the Metropolitan Church Association, a group of strident, legalistic holiness people who sat in judgment on virtually everyone else.

Messenger was able to ban liquor and other vices from his mill town, but the controversy cost him his job. He moved his wife and six children to Chicago, the MCA’s center, where he contributed articles to God’s Revivalist, associated with God’s Bible School, and to The Burning Bush, the MCA’s paper.

The Burning Bush regularly attacked other holiness people. In Holy Jumpers (2010), historian William Kostlevy describes The Burning Bush as a “muckraking holiness paper.” Phineas Bresee was a frequent target of its acid criticism.

It would be good if every Nazarene pastor was an Elijah who was fed by ravens in their need. Alas, “we are not seeing many miracles of that kind.”

Full-page cartoons appeared on the front cover of the paper. They lampooned nearly everyone of note in the holiness movement, including National Holiness Association leaders and evangelists. The MCA considered them “holiness compromisers.”

The MCA also rejected private property. Messenger and his wife liquidated their assets, gave their fortune to the church, and entered into communal living. The goal was to replicate the early Jerusalem church in “holding all things in common.”

Messenger got involved in the MCA’s business end. He had a role in moving the headquarters to Waukesha, Wisconsin, where he oversaw publication of an array of products including books, songbooks, and other religious merchandise. His greatest success was the Scripture Text Calendar, which he began producing in 1903. Over time, the calendar’s commercial success led to tensions between Messenger and Harvey. In 1913, Messenger left the MCA and moved back to Chicago, where he launched the Messenger Publishing Company.

Others left the MCA to join him. Though starting with no capital, his company would eventually do a quarter-million dollars of business a year. He soon was publishing over four million copies of the Scriptural Text Calendar a year. Funeral homes, especially, distributed them.

Three years after breaking with the MCA, the Messengers joined Chicago First Church of the Nazarene. Rev. M. E. Borders, who received them into membership, made F. M. Messenger an associate pastor of the church. Messenger’s business acumen was highly prized, and he became a valued member of the Chicago Central District.

In 1919, Messenger began playing a wider role in Nazarene life. The Fifth General Assembly (1919) created a General Board of Ministerial Relief and a General Board of Mutual Benefit (today’s Pensions and Benefits USA). Messenger, Rev. E. J. Fleming, and three others served as the members of both boards. The first board provided relief for elderly ministers or their widows. The other provided relief to subscribed ministers or laity suffering dire accidents or sickness.

One critic did not approve of such boards and wanted church money spent only on getting “folks saved and sanctified.” Messenger replied: it would be good if every Nazarene pastor was an Elijah who was fed by ravens in their need. Alas, “we are not seeing many miracles of that kind.” So we could fold our hands “and say to widows and orphans, ‘Be ye warmed and filled,’ while [gazing on] with dry eyes and sanctimonious looks.” Or, he concluded, we could take responsible corporate action to help them.

The General Board was created in 1923. Messenger, elected to it, served as its president from 1923-1928, helping to establish its working procedures. The General Board’s original design did not include the ministerial relief board. Messenger and Fleming successfully argued to incorporate it within the General Board.

Messenger’s other church service included serving on the Nazarene Publishing House Board. A son, Harry, took his place on the General Board in 1929.