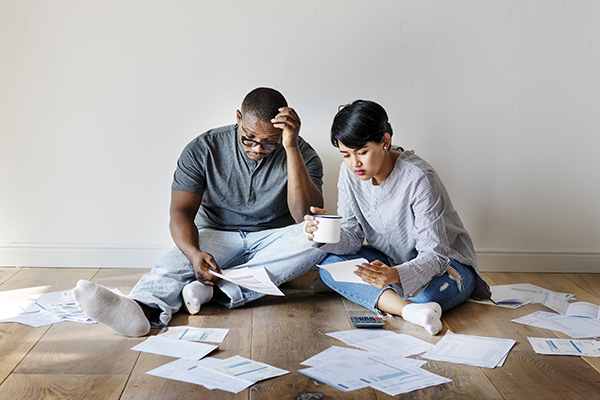 I heard a knock on the front door. When I opened it, Ned (name changed) smiled and greeted me. I stepped onto the front porch to talk with him.

A friend of a family who had been part of the congregation for decades, Ned had started attending our church several months before. He was old enough to be my father, unmarried, and always wore a coat and tie on Sundays.

As I pondered his request, I looked a block down the street and saw his car, an older, compact model, in the church parking lot. The car’s body was in good condition.

41% of adults would either have to sell something or borrow money if they encountered $400 in unanticipated expense.

So why did Ned need a loan? He appeared to have an extremely modest lifestyle. He was employed, and, based on our interactions, I imagined him to be a delightful coworker. How could he not have the financial resources to cover an unexpected expense of just $300?

As it turns out, many people like Ned live in our communities. In a survey of 12,000 persons, the Federal Reserve’s 2017 Report on the Economic Well-Being of U.S. Households indicated 41% of adults would either have to sell something or borrow money if they encountered $400 in unanticipated expense. This was an improvement from 2013 when 50% indicated they had no financial wiggle room, but 41% is still a staggering statistic.

Some people in a financial squeeze turn to payday loan companies. I recently spoke with a pastor who told me of a man in his community who borrowed money from a loan shark. The man needed $150. He did not have other resources, his credit cards were maxed out, and he would not steal or sell marijuana. So, as a last resort, he took out a loan. He eventually paid $6,500 for the $150 originally borrowed. The congregation this pastor serves is creating a plan to provide an alternative that includes short-term assistance, financial education, and guidance in setting up a savings account so families can build their own emergency funds. Numerous congregations and social service agencies across the United States are taking similar steps to serve this vulnerable segment of our society.

Debt seems to be a major factor in households not being nimble enough to navigate unexpected expenses. Using data from the Federal Reserve Bank of New York, NerdWallet.com estimated in December 2018 that the average household carried $135,768 in all debt (includes credit cards, car and student loans, mortgage, etc.). The average balance carried from month to month on credit cards was $6,929 per household. If families have a pattern by which they regularly buy today and pay tomorrow, and the debt increases over time, it should not be surprising that they can be devastated when faced with a financial emergency. Elimination of debt is a major component in preparing for the financial unforeseen.

While creating additional income can help immensely, most families need to start by reducing expenditures. I have heard of folks who made a game out of how many days they could go with zero purchases. By lowering cash outflow they create a surplus that can be directed to a savings account. Even with a modest reduction in spending, say $10 per week, at the end of a year they would have more than $500 in an emergency fund. So if they bust a tire because of a pothole that emerged in the dead of winter (a common occurrence where I live), they have a cushion to absorb the financial jolt.

Ned was a man of his word. The $100 payments arrived as promised. I wish I had taken the time to help him prepare for his next time. Next time always seems to show up when it is least expected.