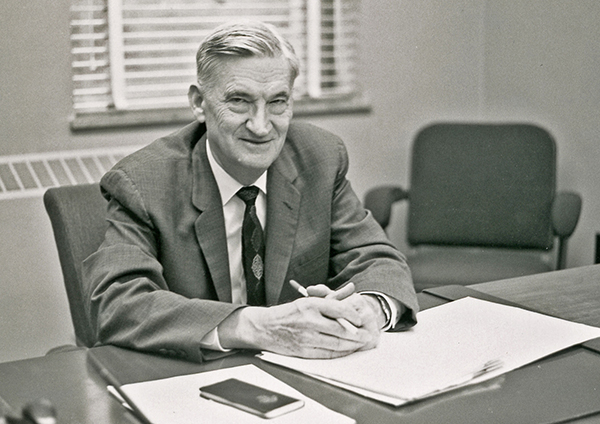 Several generations of leaders shaped the Church of the Nazarene’s pension program through service on committees and commissions and through General Board oversight roles, John Oster noted in his history of what is now Pensions and Benefits USA. Oster recognized T. W. Willingham for serving the pension interests in multiple roles over a 35-year span.

Theodore Weber Willingham was born in Sebree, Kentucky, in 1893. He was one of eight children. His father operated a farm, a store, and served as a lay preacher.

The Willinghams moved to Highway, Kentucky, so the children could attend a school operated by the Methodist holiness pastor, Rev. J. S. Keen. When the school folded a few years later, Father Willingham built a place of worship and preached to the people.

T. W. Willingham became a student at Ruskin Cave College in Tennessee. Before his senior year, though, he contracted malaria and had to move back home to recover. The family, meanwhile, had moved to Olivet, Illinois, and, after healing, Willingham stayed and took his senior year at Olivet College.

He was converted and professed entire sanctification during this period, joining the Nazarenes in 1914. He graduated with his B.A. the next year and married Mary Cusick, an Olivet teacher. In 1918, he completed a B.D. degree as well. R. T. Williams ordained him an elder that year.

Willingham only pastored one church, in Danville, Illinois. He was still a student when his tenure began. In 1921, he became Olivet College’s part-time treasurer, working to free the school from an enormous debt. He resigned his pastorate in 1923 to work for the college full-time.

He used vivid illustrations in his sermons that captured the attention of children and adults alike.

In 1926, he was elected college president. He served in the role nearly 13 years. He was an evangelist for three years, until he was elected superintendent of the Missouri District in 1940.

In 1945, the general church called on him to be the Executive Director of the Nazarene Radio League, which the 1944 General Assembly had authorized. In this capacity, Willingham oversaw development of the “Showers of Blessing” radio broadcast (in English) and “La Hora Nazarena” broadcast (in Spanish). The broadcasts, recorded on reel-to-reel tape, were shipped to radio stations to air.

Hundreds of radio stations worldwide eventually carried the broadcasts, which featured uplifting music and notable preachers. The work of the Nazarene Radio League comprised a core element of the Church of the Nazarene’s strategy to extend its Wesleyan message globally in the post-World War II era.

In this role, Willingham interacted with a variety of distinguished Nazarenes: musicians and brothers Ray and Gary Moore; H. T. Reza, the primary preacher on the Spanish broadcast; and a revolving cast of preachers on “Showers of Blessing,” including evangelist and long-time broadcast preacher C. William Fisher.

The 1948 General Assembly created the Commission on Ministerial Benevolence Revision, and Willingham was named as its chairman. Other members included M. Lunn, John Stockton, and S. T. Ludwig. That same year, the Department of Ministerial Relief was renamed the Department of Ministerial Benevolence. Four years later, the General Assembly would create the Board of Pensions, of which Willingham served as chairman from its inception until 1972. In 1960, he relinquished his role as executive secretary of the Board of Pensions to a young Dean Wessels.

Willingham strove to build the church in other ways, too. He headed the Commission on Relocation of General Interests, which developed the campus at The Paseo and 63rd Street where Nazarene Theological Seminary and the Nazarene Headquarters found a new home in the 1950s. The master plan called for relocating Nazarene Publishing House (NPH) to the site, too, though this did not occur.

Willingham also led the Radio League until 1965. That year, he and his wife celebrated their Golden Wedding Anniversary with a reception at their home.

He spent his retirement years preaching at camp meetings, conferences, retreats, and other gatherings. His wit and wisdom were always prized. He used vivid illustrations in his sermons that captured the attention of children and adults alike.

A widower for many years, Willingham contributed most of his estate to the church. Some went to the minister’s retirement fund and Kansas City First Church, with the bulk going to Nazarene Bible College. Shortly before his death, he paid NPH to publish and distribute copies of short books he had written (the “Crumbs” series) to every Nazarene elder in the United States.

T. W. Willingham died April 29, 1989, at Baptist Hospital in Kansas City, age 96. He was laid to rest in the company of many friends from former years in the Nazarene section of Kansas City’s Green Lawn Cemetery.