Spending Without Being Spent 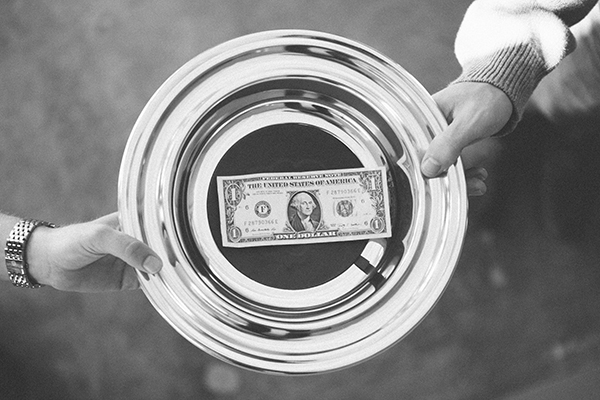 Several years ago, I read a story (fictional, I think) set in the lean years following World War II. A single mother (maybe a war widow) did her best to provide for three children. When the pastor announced that in four weeks the congregation would receive a special offering for a needy family, the mother and children discussed what they might do so they, too, could participate. They turned off the lights to reduce the electric bill. They ate boiled potatoes more often than they preferred. The mother postponed the purchase of shoes for the son. The family turned it into a game to see how much they could set aside for the special offering.

On the assigned Sunday morning, the mother reached in her purse and handed each of her children a crisp $20 bill. The Friday before, she had gone to the bank and exchanged the coins and bills they had collected. One by one, the children dropped their bills in the plate as it was passed down the pew. The children skipped and sang as they walked home from church that day, a joyful response to what they had just done.

That afternoon, the mother responded to a knock on the door. The children crowded around the mother and saw it was the pastor. The mother opened the screen door and the pastor handed her an envelope. “We received this offering for you,” he said.

After the pastor had gone, the mother looked inside the envelope. It contained three twenties and two $1 bills.

The family sat in the darkness that afternoon, not because they needed to decrease electricity use, but because it fit their mood. The children had never thought of themselves as needy, but the pastor himself had indicated that they were. No one seemed able to explain what had happened, how the “needy family” contributed almost all of the special offering. The lingering excitement of the walk home from church evaporated when the pastor handed the envelope to the mother. She just slipped it into her purse.

“You must be a rich church."

I like this story for a myriad of reasons. This family had great financial needs, just like the Macedonian churches Paul commended (2 Cor. 8:1–2). Even so, they gave generously and demonstrated a cheerfulness in doing so. They did not believe the pastor when he designated them as needy, something that could have caused them to become reluctant to contribute to the missionary. Instead, without a word among themselves, they knew the right thing to do with the envelope the pastor gave the mother that Sunday afternoon.

A practical lesson from this story comes from how the family gathered the money. They reduced expenses. Sure, generating more income is a viable way to be able to have additional funds. For some, a second or third income can be essential in establishing financial stability. Many, however, do not have that option. But everyone can decrease spending. Even a few dollars a day—foregoing a cup of coffee or packing a sandwich rather than buying one at the deli—add up over time.

“You must be a rich church,” the missionary exclaimed when the amount of the offering was announced to the congregation. “Yes,” the mother thought, “We are rich.”

Once again, as they walked home from church, the children skipped and sang.