Thanking God Despite the Darkness 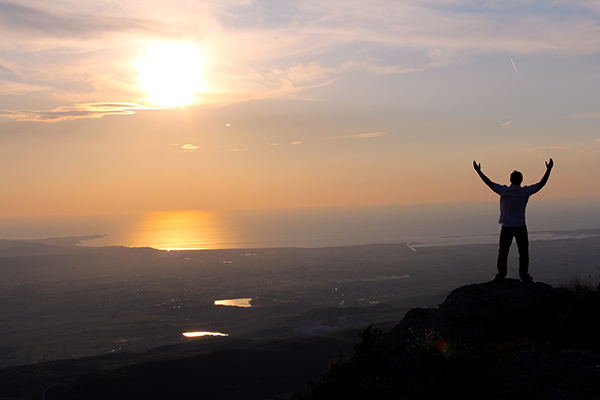 The Thirty Years’ War (1618–1648) proved to be intensely cruel and destructive. Over three decades, the conflict accompanied by famine and epidemic decimated the population of Germany from 16 million to 6 million.

A glance at the experiences of people in one city provides a bleak picture of life in the mid 17th century. Wave upon wave of invading armies destroyed crops and plundered shops. Refugees fled to the walled city of Eilenburg for protection. With overcrowding came famine. Reports from the time describe up to 50 people fighting in the streets for a dead crow or cat to eat.

Unsanitary conditions and the lack of food bred disease. The plague of 1637 was especially harsh as persons were struck by fever and diarrhea. About 8,000 died that year, including many children, and all but three municipal leaders. Only one pastor survived.

Fighting, famine, and infection wreaked ruthless economic consequences on Eilenburg and the region, making rebuilding slow. Historians tell us the area's anemic economy lasted for more than a century.

Through all our life be near us,
With ever joyful hearts
And blessed peace to cheer us
And keep us in his grace.

As I write this, we are barely three months into the pandemic known as COVID-19, and life has changed for all of us. Pastoral ministry practices have been altered. Visitors, even pastors, are not permitted in hospitals. Congregations cannot gather in the sanctuary for Sunday worship.

The personal finances of bivocational pastors change when income from non-church employment is suspended. Congregational finances are affected, too. Pastors already know that when they cancel a Sunday service for adverse winter weather that giving for the month will decrease. When a congregation cannot meet for two or three months, the problem is compounded. For some members, online giving is not an option, so congregations have to deal with logistics, like how to receive contributions, who will count them, and who will deposit them in the bank.

Pastors struggle in many ways with how to talk about the financial problems of the church in a time when the need is overwhelming. Some pastors are conflicted, feeling it is inappropriate to ask for a little bit more from folks who are already stretched to their financial limits. Others strive to negotiate the delicate balance of being honest about financial reality while avoiding shame-based, manipulative actions.

A Hymn of Thanksgiving

Martin Rinkart began pastoral service at the Lutheran church in Eilenburg in 1617, one year before the start of the Thirty Years’ War. He died in 1649, 14 months after the conflict ended. During the entire 32 years of ministry with his congregation, Rinkart served under dire circumstances.

Invading soldiers slept in his family’s beds and ate their food. At times, Rinkart had to borrow money to feed and clothe his children.

The epidemic of 1637 was especially difficult. For a time, Rinkart was the only pastor in town. Sometimes he conducted as many as 50 funerals in a day. In one year, he officiated at 4,480 funerals, including the one for his wife, Christine.

This horrendous context formed the backdrop of a hymn Rinkart wrote for his family to use as table grace. In doing so, he seems to have wanted his children to envision hope beyond the bleak circumstances in which they lived. In the first stanza, he reminded his children of God’s care, like the tenderness of a mother. In the second verse, he articulated his own petition, asking for guidance during times of confusion and liberation from the awful conditions in which they lived. The hymn closes with a triumphant call for God’s people to voice their thanks and praise to the eternal God who reigns over all.

Now Thank We All Our God

Now thank we all our God
With heart and hands and voices,
Who wondrous things has done,
In whom his world rejoices.
Who from our mothers' arms
Has blessed us on our way
With countless gifts of love,
And still is ours today.

O may this bounteous God
Through all our life be near us,
With ever joyful hearts
And blessed peace to cheer us;
And keep us in his grace,
And guide us when perplexed,
And free us from all ills
In this world in the next.

All praise and thanks to God
The Father now be given,
The Son and him who reigns
With them in highest heaven,
The one eternal God,
Whom earth and heaven adore;
For thus it was, is now,
And shall be evermore.

(Martin Rinkart; translated by Catherine Winkworth; Sing to the Lord, 766.)

This hymn was sung at a celebration service after the end of the Thirty Years’ War. It did not gloss over the injustices inflicted upon or the despair of the citizens of Eilenburg. It did call for a perspective that comes as God’s people lift their eyes from difficult circumstances to see the gracious God who cares and comforts.

Maybe we, too, need to sing this hymn, not at the end of a season of difficulty but in the midst of trying times. Some congregations and pastoral households were already stretched financially before the onset of this virus. The current circumstances will likely require drastic adjustments in the coming weeks as pastors and boards seek to discern God’s direction. But regardless of the circumstances, we, like Pastor Rinkart and his congregation, can join together to articulate our thanks for “countless gifts of love” from a God who “still is ours today.”