Written by Daron Brown
From his column Pressing On 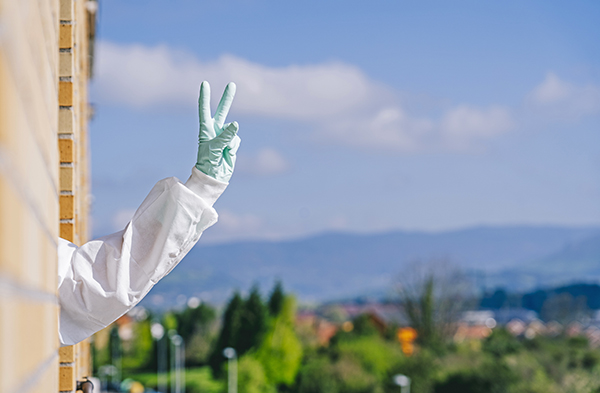 St. Mary’s Church in Gloucestershire, England, is known for its vivid stained glass windows dating to the early 16th century. One image shows the devil carting away a woman in a wheelbarrow. The scene is stark and busy. The woman is pale and slouched. The devil appears disinterested. The image likely arose from sermons of the era. It’s believed the window may be the inspiration for the alliterative phrase “hell in a handcart,” since wheelbarrows were known as handcarts in that era. Today, we hear it as “hell in a handbasket.”

So far, 2020 has seen a series of harrowing ordeals: COVID-19, economic fallout, a slew of natural disasters, heightened sensitivity to racial injustice, and rioting top the list. More than one person has suggested to me their belief that our world is “going to hell in a handbasket.”

While these times are remarkable, it is important to acknowledge that people have endured remarkable times before. Every generation myopically fixes attention on their own struggles, but this does not diminish them. The problems we face are very real and sometimes it does feel like our world is being carted toward hell.

Such growing pessimism about our state of affairs even seeps into Christian circles. This leads some to attempt to make sense of things in negative ways by interpreting ruinous events as signs of God’s culminating activity in human history. This line of thinking is not new, it just gains more traction during times of crisis.

John Wesley lived against a backdrop of theological pessimism. His Western contemporaries focused heavily on the sinful nature of humanity. The bad news of sin took center stage. The good news of God’s grace was crowded and minimized. This was not the case for Wesley, however, who took hope in the power of God’s grace. Wesley took sin seriously, but he believed grace transcended the effects of sin, thus changing hearts and lives. For Wesley, the word “salvation” was broad, stretching to include the renewal of humanity in the image of God. Such optimism, grounded in God’s gracious activity, is a dominant thread throughout his life, ministry, and thought.

Optimism of grace pertains not just to the state of humanity. Scripture points toward a time when “creation itself will be liberated from its bondage to decay and brought into the freedom and glory of the children of God” (Rom. 8:21). God is moving toward the transformation envisioned in the final pages of Revelation as a new heaven and earth. This is the future, and, although we do not always feel it, God’s future is rushing into our present. Because of this, we, too, should be optimistic.

Pastoral leadership is challenging enough when life is going smoothly. The events of 2020 have compounded the complexities of our work. Nevertheless, it is a privilege to pastor people through such times. Crises create space for people to imagine life differently. Against this backdrop of prevailing pessimism, we offer a counter-narrative. We get to declare the ways in which God is active and powerful. Many people lack eyes to see or ears to hear. Cultural and religious pessimism has dulled their senses.

Our role is to point to God’s redemptive work in our communities and throughout the world. We tell the truth about sin, brokenness, death, and disease. We name the anxiety, despair, and fears. We offer opportunities for lament. But we also tell the truth about grace. The whole truth. Everything that has been undone by the power of sin is the object of God’s relentless quest and intent to bring full renewal. God’s world is not “going to hell in a handbasket” precisely because it is God’s world.

That is reason for optimism.