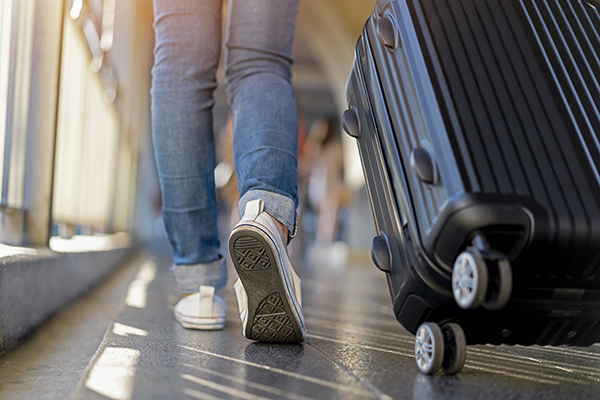 A person can walk down any airport concourse in the world and see a pack of suitcases roller skating. The notion of wheels on luggage, however, took almost 100 years to catch on. Researchers have found a patent for a wheeled trunk issued in 1887. They have not found, however, evidence of production or sales in the 19th century.

In 1932, John May started pitching the idea of a wheeled suitcase. He later estimated that for almost 20 years he talked with 1,500 individuals and 125 groups about his concept. May reported that only one man took him seriously.

Bernard Sadow introduced luggage on wheels in 1972, but few were interested. Then came Robert Plath, a pilot with Northwest Airlines. Plath designed, produced, and marketed the Rollaboard in 1991. The promotions showcased the origins of the wheeled suitcase as coming from within the travel industry. Advertisements claimed it to be the “first choice of aircrews worldwide.” Potential customers were enticed to envision themselves grabbing the handle and pulling their luggage from the ticket counter to the gate, through the plane door, and down the aisle to their seats. Easy peasy.

Robert Shiller, a Nobel Prize recipient, shares this information in his book Narrative Economics. Shiller credits the storytelling that followed Plath’s invention as instrumental in changing the suitcase industry. Others had the idea decades earlier, but a sales boom occurred only after the product was accompanied by a compelling story.

Many passages in the Old Testament show the power of storytelling in the discipleship of God’s people. “Tell it to your children,” Joel said, “and let your children tell it to their children, and their children to the next generation” (1:3 - all scriptures NIV). In John 20, John acknowledged that he had told only some of the stories about Jesus in his gospel (v. 30). The stories he did tell, he said, were “written that you may believe that Jesus is the Messiah, the Son of God, and that by believing you may have life in his name” (v. 31).

While COVID-19 dominates the news cycles, the stories we tell each other will strongly influence the journey we are on.

Examples of what Shiller calls narrative economics are found in the New Testament. Economics is the study of producing, consuming, and transferring wealth. This is exactly what we find at the end of Acts 4 where Luke summarized the economics of the Early Church. Some who owned lands and houses (both plural in the Greek) sold property and turned the proceeds over to the apostles for distribution to those who had need (vv. 32–35).

Luke then told two stories to illustrate what he had just summarized. Barnabas “sold a field he owned and brought the money and put it at the apostles’ feet” (v. 37). Ananias and Sapphira, too, sold land, but in contrast with what Barnabas had done, they gave only a portion of what they had received for the care of their friends in need. Peter said that their deception was a sin against God. Both Ananias and Sapphira died that day (5:1–10).

As the story of Ananias and Sapphira was told and retold, “Great fear seized the whole church.” Further, those beyond the church “heard about these events” and soberly noted the awe-full consequences of actions outside of God’s economy (v. 11).

Paul used a story to describe God’s desire for the life of God’s people. The Macedonian congregations, he said, faced “severe trial” and “extreme poverty.” In spite of these highly-charged challenges, “their overflowing joy ... welled up in rich generosity” (2 Cor. 8:2).

I started pastoral ministry in 1977. I cannot count the number of times I’ve read Paul’s words to the Corinthians about the “severe trial” experienced by the Macedonian congregations. I’ve taught and preached from 2 Corinthians 8 and 9 at strategic times in the congregations I led. What we are experiencing during this pandemic, however, is closer to a severe trial than any other experience I’ve had in the last 40 years.

Part of me wants to find an answer to our dilemma. Given the way my mind works, I naturally try to figure out what action needs to be taken today to make things better in the weeks ahead. I want to fix things.

But then I notice that Paul’s description of the Macedonian congregations did not include the report that someone had created a handbook for church boards to use during financial crises. Instead, Paul described God’s character. When our needs were great, he said, God graciously gave and gave. The character of God is revealed in the generous ways He lavishes love on all creation.

God’s character is to be illustrated in the life of His people, too. Christians are to be known for their generosity. Even in times of severe trial, Paul told the Corinthians, they should embody God’s grace by living with an open hand.

While COVID-19 dominates the news cycles, the stories we tell each other will strongly influence the journey we are on. If our stories highlight those times when we experienced the richness of God’s grace, and we embody His character through generosity, then we will safely navigate the uncharted road before us.

Paul’s words are for us, too: “Each of you should give what you have decided in your heart to give, not reluctantly or under compulsion, for God loves a cheerful giver” (2 Cor. 9:7). These words hold high the light for God’s people even when engulfed by the darkness of economic difficulty.