Written by Mark Evilsizor
From his column Tech 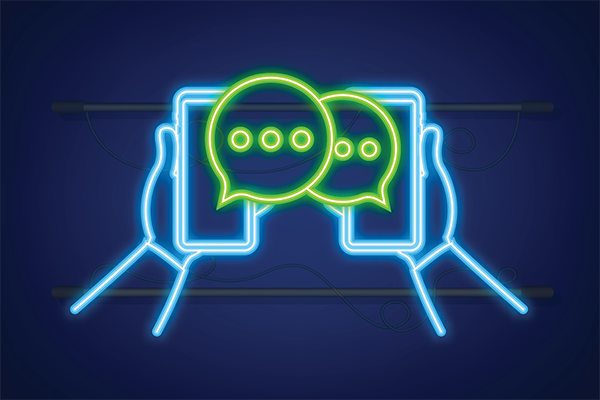 There is a great divide in this country, and I have held off addressing it long enough in this column, so let’s get into it. It is an issue that divides family and co-workers and likely the people sitting in the very pew next to you. It has built walls and created disharmony across our nation. Of course, I am talking about the great debate over Android vs. iPhone. Sherry and I even know several couples where one spouse has an Android phone; the other — an iPhone. All of these individuals have a core belief, usually rooted in the distant past, that serves as their mythical anchor to the platform of their choice (and they each have a covert tech helper friend so they can maintain a strong front to each other). Nowhere is this divide more apparent than when it comes to messaging. In our group chats there is that one person who keeps us green in our messaging and prevents us from reaching the more soothing shades of blue and the additional features that it brings (Android readers, ask your iPhone friends. They will explain). Today, let’s take a look at a few of the options for messaging apps that work on both platforms, and which provide the rich features that make messaging fun, secure, and private.

Traditional text messaging, aka SMS, is the baseline app which accompanies all modern phones. It is easy to text anyone in your contacts list regardless of the type of phone they have. However “short message service” does not include the features of a modern messaging app. You can’t have threaded conversations (replying to a particular message); you can’t emote (thumbs up, LOL, etc.) a particular message; and a host of other multimedia features are unavailable. Also, SMS messaging is not encrypted. This means messages are easily read and stored by every piece of equipment between you and the people you are messaging. End-to-end encryption means that only you and the persons to whom you send your messages are able to read/hear/see the content you transmit.

Two of the most popular cross-platform messaging apps are WhatsApp and Facebook Messenger. These are very convenient apps. If you already have a Facebook account, minimal effort is needed to get started with their program. Facebook also recently announced Messenger users will be able to initiate group chats with Instagram users (also owned by Facebook). With such widespread use, it is likely your friends already have one of these accounts. They include a lot of fun features like stickers, animated gifs, video conferencing, etc. However Facebook’s primary source of income is from advertising, and the more it learns about you, the more it is able to earn from targeted advertising. While WhatsApp does offer end-to-end encryption, some information about how you use the app is shared with Facebook and likely adds more details to their profile of you.

Two of the most popular cross-platform messaging apps are WhatsApp and Facebook Messenger.

Signal is another messaging app you may want to consider. It was created with the help of one of WhatsApp’s founders, Brian Acton. He provided initial funding to the nonprofit organization which created and runs the Signal messaging apps and service. Signal also has many fun, modern messaging features like stickers, emojis, threaded conversations, and it enables communication by text, voice, or video with groups of up to 1,000. It also features end-to-end encryption by default. The messages are only stored on the phones of the persons communicating, and information about the recipient is not retained. An added benefit is that there are no residual copies to be stolen nor metadata to be used by advertisers or hackers. Because of the strength of its privacy and security measures, Signal has often been used by activists, or by those living in countries with repressive regimes.

A downside may be that Signal has a smaller set of users, which means you may need to convince your circle of friends to use it. Additionally, since messages are not retained by the company who made the app, when you change phones, extra steps will be required to transfer messages to the new phone.

Alas, the Android/iPhone divide likely will never be bridged, but this doesn’t mean we can’t effectively communicate with our “heathen” friends on their obtuse platforms even beyond simple text messaging. Consider talking with members of your group of friends and loved ones about what they are using, choose a common messaging app, and let’s all work at communicating a little better.

Mark Evilsizor has worked in Information Technology for more than 20 years. He currently serves as head of IT for the Linda Hall Library in Kansas City, Mo. Opinions are his own.